I hate to disappoint you all…but late last night all three children caved.  The Strike is over.

They actually began turning on each other. It got ugly. Each one blamed the others for the mess and they began yelling at one another to pick up after themselves.  Oh the irony. I wish I had filmed it. The drama and fight was Oscar Award winning worthy, or a nomination at the very least.

Dylan and I did not intervene in the fight, which of course made them turn on us. Their anger at why I hadn’t cleaned up made me laugh. Turns out my laughter was like poking a bear;  hormonal pubescent bears with dirty clothes and pooh bags for lunch.  Not pretty. Each of them insisted NONE of the mess was theirs. So we took a walk around the house. I even held their sticky little hands as I led them around on our discovery tour.  Good times I tell ya, good times.

Now we all now that at the age of about 12 each child has a magical transformation that enables them to know EVERYTHING there is to know about ANYTHING. Ironically at the same time of their knowledge acquisition, adults around them lose ALL of their own previous knowledge in any way, shape or form. This is confusing to me as I was once was a 4.0 student with scholarships and my name on the Dean’s List and Presidents Honour roll.  Apparently now I’m so clueless that I could make a guest appearance on TLC’s Honey Boo Boo.  Regardless, no matter how hard they argued that they were right and I was wrong…the evidence around us was like a CSI crime lab.  Yeah, that’s right, I went all ‘Bill Nye the Science Guy’ on their ass’s. And science doesn’t lie folks

Humour is obviously an important part of our family life. We kept it light and made jokes as we talked and explained what has been going on. They argued as they told me some of the mess was mine. I’m a little embarrassed at the satisfaction I took from explaining that I had washed only my dishes and picked up only my things. Ahh, who’s kidding who, I'm not embarrassed. I loved every freaking minute of it. It helped that I was already one glass in.

Dylan jumped up and down yelling while flapping his arms in the air “I PACKED YOUR LUNCH IN POOH BAGS!!! LOOK AROUND YOU PEOPLE, YOU ARE DISGUSTING CREATURES”. I was worried he was going to have brain aneurysm. I poured him a glass of wine.

The light bulbs went on…some brighter than others.  I never really liked science but a bonus conclusion of this experiment was to watch and learn more about my children’s personalities by how they reacted.  I should have included this in my original hypothesis.

Olivia told me this was the “Dumbest thing ever!! Kids have parents for a reason, to clean up after them”. I almost spit my wine out at that one...but I held back as I didn’t want to commit a wine crime or face having to have the carpets cleaned on top of it all.  She was irate that I had ‘lied’ to her all week telling her I was ‘busy’. No, I really was busy my sweet Olivia. Busy getting my nails done, busy drinking red wine and busy writing a blog all about the basement trolls I live with. She was down right angry and blaming everything on everyone around her. If I recall from my psychology classes this is called ‘External Attribution”…..or Socio-Path. I really can’t remember which right now.

Peyton announced that she  ‘knew something was up” Really Einstein?? What was your first clue?  The Jenga game of dirty dishes on the counter, the homemade crazy glue or our new colony of fruit flies that I have started giving names to and tucking in at night? Although she laughed, she insisted that only 5 thing left out were hers. Yes, that’s right, 5 things in 5 days. What a little angel. I call bullshit. I think it’s hard for her that I was right. Oh, I love saying that, lets say it again. I was right. I made her do the “I was wrong, you were right dance” complete with Jazz Hands. I filmed it; perhaps I will post it someday. She did laugh hysterically at my creative parenting and I realize she comes by her snorting honestly.

All three of them apologized and did thank me for what I do. I must admit I imagined this moment a week ago very differently than what I actually felt last night.  I pictured we would all hug and cry while the “Wind Beneath My Wings” played as background music. They would  crown me the best mother in the world as they all cheered me on and applauded my brilliance. In reality, the theme song in my head was from “Chariots of Fire” as they all yelled and fought around me. I closed my eyes and imagined I had just climbed Mount Everest and as I stood at the top of the mountain I screamed “THAT’S RIGHT!! IN YOUR FACE SUCKERS!! I WIN!!” I’m not proud, but its how I feel. Like the Stilwell Fight Club.

Today began the cleanup. I am not touching a thing and this house is on lock-down until it is to my standards. I’m sitting on the couch drinking coffee that I made them make for me. Quinn continues to gag and mini barf in her mouth every time she goes near the sink. She had to sit down as she felt sick.... awe muffin...are you ok?

Olivia held a glass of  ‘milk’  UPSIDE DOWN and announced  “Look mom, we made cheese!!”  I laughed and laughed and laughed. No I didn’t.  But I sure as hell giggled when she was dry heaving over the sink as she tried to clean it.

Peyton cannot believe that she lives with such pigs. I guess self-awareness is hard at this age. They all continue to blame each other and argue about who has cleaned up what. The fighting today is like WWIII. I now understand why some creatures eat their young.

I am assuming the clean up will take more than one day. Some of the small people are taking a break from this daunting clean up task to paint their nails. That’s seems like a priority. Good choosing girls.

I know some of you are sad ‘The Strike’ is over. But feel happy for me please. I WON!! And those of you who know me well know that I do love to win. My goal is to post ‘after’ pictures of my clean house in tomorrows blog and let you all know how the clean up went. But more importantly I hope you will read tomorrow as I explain from my heart why I decided to actually do this strike, how I followed through with it and what I learned.

But for now, it’s the weekend and I’m pretty sure it’s ok to start drinking earlier than usual todayJ Raise your glass with me!! 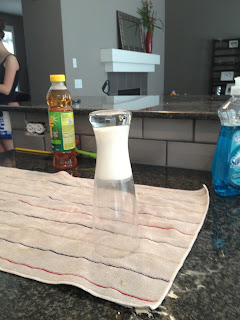 Glass of upside down milk...and a bottle of Pinesol at the ready :)
Posted by JAStilwell at 18:50

Click here and magical wine fairies will appear at your house.

Popular Posts (AKA Stuff I wrote that got me on TV)